NURE entered the ranking of THE Impact Rankings 2021

In the third issue of the influence ranking from the British company Times Higher Education, Kharkiv National University of Radio Electronics took a place in the group 1001+.
Impact Rankings assesses the contribution of the world’s universities to the UN Sustainable Development Goals for 2030. In addition to the general place in the world ranking, places are determined for each of the SDGs. More and more universities are recognizing the importance of prioritizing sustainable development in their activities, which is reflected in the expansion of the ranking. The 2021 ranking is the largest to date and includes 1,240 universities from 98 countries.
This year, 15 Ukrainian universities were included in the overall ranking.
Of the 7 SDGs in which the University of Radio Electronics has achieved achievements, the best recognized are SDG 3 “Strong Health” (position in the group 601-800), SDG 5 “Gender Equality” (position in the group 601+), SDG 10 “Reducing inequality” (position in group 301-400). According to the mandatory for participation in the ranking of SDG 17 “Partnership for Sustainable Development”, NURE took a place in the group 601-800.
Links to the official website, department websites and other relevant sources are provided as evidence and confirmation of the universities’ efforts to achieve the SDG. Bibliographic information is provided by the Elsevier ranking partner. To do this, Scopus has created specific queries that narrow the metric area to articles related to each SDG. As in the world ranking of Times Higher Education, the five-year window between 2015 and 2019 is used. 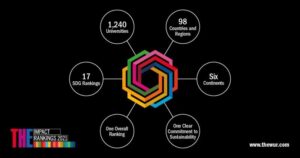 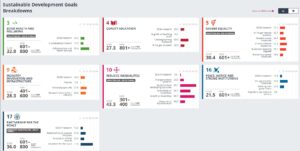